The 3 wide receivers (A, B, D)  line up to the far right near the sideline and close together (this is the same for all “Trips” formations).  The quarterback (Q) is under center (C) and the running back (R) is lined up on the opposite side from where the wide outs are lined up, 3-4 yards deep. 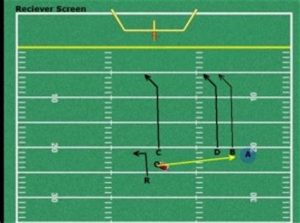 At the snap of the ball the 2 wide receivers on the inside both run deep post patterns.  The center (C) will run a deep flag pattern.  These are the decoys.  The running back (R) short out pattern just beyond the line of scrimmage.  Receiver A take a small studder step forward and turns to face the quarterback.   The quarterback (Q) should pump fake toward one of the deep receivers (B, C or D) then turn quickly and throw the ball to receiver A.   Depending on the rules of your league it may be necessary for A to step forward over the line of scrimmage before the pass is thrown.

The play is designed to catch the defender back pedaling to cover D & B as they start to pass by or moving out of position on the pump fake.    If the corner back is getting aggressive and moving up to cover A, or trying to jump the route to intercept the ball,  then you can have A run a stop&go instead.    In this case the quarterback should pump hard to A and as the defender moves up, A should sprint past and down the side line.

This flag football play can also be used for several other options from this same formation:

See this play in action 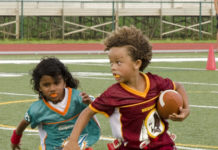