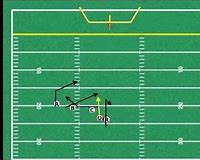 The 2 wide receivers (A, B) line up to the far left or right, depending if the formation is stacked to the left or right. They should be near the sideline and somewhat close together (this is the same for all Twins formations). The quarterback (Q) is under center (C) and the running back (R) is lined up on the opposite side from where the wide outs are lined up, 3-4 yards deep.

Twins Inside Slants gets it name because the two inner-most receivers are performing slants across the field, while outer most receiver (A)  does a quick 5 yard hook.  It should be run near the corner back so as to draw that player away from receiver (B) should he get the ball.

Optionally this flag football play (as with most twins formations) can be called as a fast hand-off or a running back draw. This occurs exactly as explained in the play Twins Out. 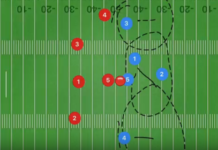