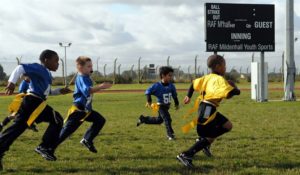 Parents who are not very familiar with the game of flag football will find more enjoyment from watching their child if they have a basic understanding of how the game is played. Below is a collection of the most common youth flag football terms broken into two categories. The first describes the elements of the field and those terms used when talking about the field. The next list contains terms used to refer to actions players can take during the game.

Sideline – The line that designates the outer boundary of the field.

End Zone – The scoring portion of the field.  There is an end zone located at both ends of the field, opposite to each other.

Field Of Play – The portion of the field in side the side lines and excluding the end zone.

Line Of Scrimmage (LOS) – This is an imaginary line that extends from both sides of where the ball is marked on the field to the sidelines.  It represents how far the offense has advanced the ball.

Backfield – Any part of the field directly behind the line of scrimmage.

Pass –  When the quarterback attempts to advance the ball by throwing it from behind the LOS, forward to a receiver.

Down – Each team gets a series of 4 downs to advance the ball to the scoring area.  A down is the period from the snap of the ball until the end of the play.  A team can also earn a first down by advancing the ball beyond certain points in the field of play.

Formation –  The pattern in which the offensive team lines up at the LOS prior to snapping the ball.

Huddle –  When the offensive team gathers together before a play to set up their formation and plays to be used for that down.

Incompletion – When the offense attempts a forward pass but the ball is not caught or is caught outside the field of play.  Play will stop and the down is over.

Tackle – This is the action of stopping the ball carrier by pulling a flag from the flag belt.  At this the down is over and play stops.

Touchdown –  This is a score earned by advancing the all into the end zone.  The scoring team receives 6 points.

Conversion –  After a touch down the team that scored is allowed an 1 attempt to score bonus points.   The bonus can be either 1 or 2 points depending on how the team advances the ball and/or where the team advance the ball from.   Typically 1 point is awarded for scoring from 5 yards out and 2 points are awarded for scoring from 10 yards out.    Some leagues instead score 1 point for a running play or 2 points for a passing play. 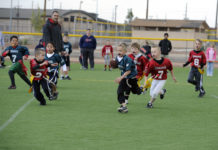 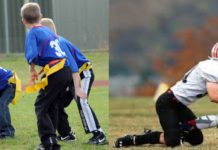